The geography of the game is split into various locations or areas.

Locations hold a variety of resources. In home locations there is a spawning generator that randomly creates certain types of objects on the maps, those being: weeds, grass, trees, bandits, and for Ladies unwieldy stones. Locations may change appearance according to seasons. 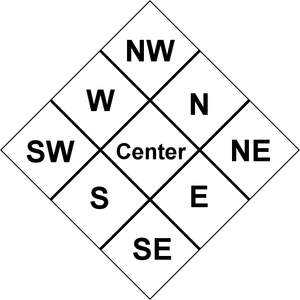 The cardinal directions of location maps in-game (as seen e.g. on the Geo-Compass) have the north to the top-right side, east to the bottom-right, south to the bottom-left, and west to the top right; the map corners clockwise from the top are thus NW, NE, SE, SW.

There are home locations that can be freely accessed and used and which are connected to the main Storage inventory; they are switched-to usually via the Portals.

There are travel locations which need to be traveled to via airship and whose resources need to be brought back home as travel finds to unpack. Travel locations are covered in fog/clouds which recedes as the player cuts their way through the resources, or unlocks areas.

Location maps can be subdivided into smaller areas or territories that need to be unlocked before they can be accessed, e.g. through restoring a structure. Sublocations are secondary locations reached by a portal in another (travel) location.

Dungeon-type locations are a kind of endlessly-repeating location. Usually to be found inside are resources, special event-connected things/items, a competition board that logs the progress of all players and awards a prize to the top competitors, and a portal structure to leave the map floor. Once the current map is left, a new similar map is loaded; this repeats forever. Access to previous maps is barred; the player can only move forward to new map floors.

Portal to the Zoo

The world map shows all locations, each labeled with its name and a flag standard.

The main home location is marked with a house symbol (

), other home locations that can be accessed by portal are maked with a portal symbol (

). Travel locations that are accessible by airship are marked with an airship symbol (

), while still-inaccessible locations are marked with a lock symbol (

). Colonies that had their daily reward collected are marked with a check symbol (

The flags of home locations and colonies have a yellow border, active travel locations have a red border, and unopened locations' flags are greyed out.

Home locations locations can be freely accessed and share the Storage. They are usually switched-between by Portal.

Travel locations, also called the Faraway Lands in the story, are locations that require travel, usually by airship. Many travel locations have a main building, which is restorable and then functions as location storage and as a barter place. Travel finds, items and structures need to be transported between travel location and home location via the airship. Travel locations can be colonized when the requirements are met and made into a Colony.

The Way of the Dragon

Temporary locations are locations that are available for a limited amount of time. They are usually available during events, and become unavailable once the event is over.

Community content is available under CC-BY-SA unless otherwise noted.
Advertisement